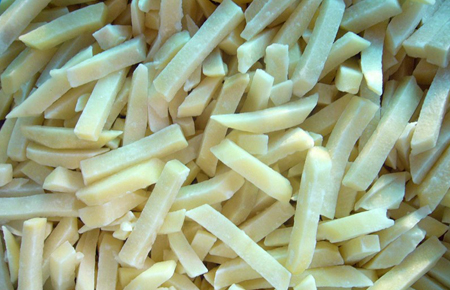 Short Description:
Today the major processed products are potato crisps and French fries in the world.

According to American standards, the oil content in French fries should range from 5 to 7% and up to 4% in partially fried French fries.

As we know, most final Fried French Fries which is ready to eat by means of the second frying of froze French fries, an industrial food stuff materials.

The final oil and moisture content of French fries are of almost 15% and 38%, respectively.

As the French fries materials, there is a different between frozen potato fries and potato chips making process. The most obvious is that Potato chips are thin and particularly crisp while French fries are of an external crispy surface and a free of oil cooked core.

Potato fries blanching prior to frying in order to improve the colour. The raw potato strips are blanched in hot water and  with hot air partly drying until reaching a moisture content of around 60% to prevent limpness and separation of the interior and the crust.

The partial fry is a much important cooking stage where the strips are cooked for a about a minute and a half in oil that’s a bit hotter than normal French Fry cooking temperatures. The sticks are fried at 180℃ for about 2 minutes or at 150℃ for about 5 minutes to get a light golden color. The final product comprises around 10% fat, most of which is retained on the surface.

The final step is blast quick freezing of the strips which travel down on the wire conveyor using air cooled down to about -40℃ and stored at – 20℃. This prevents them sticking together and helps protect the flavour.

After the processing is done, the French Fries are bagged and/or boxed which is ready for final frying by immersing the frozen product in deep fat fryer at about 180℃ until the desired color and texture are achieved in both restaurant and home.

Send Your Message to Us

Wish everyone has a wonderful beginning

After a wonderful Chinese New Year Holiday, we start our works today, 19 Feb, 2021. Good luck with everyone.

Coming soon. Merry Christmas and best wishes for a happy New Year 2021, everyone. May the holiday season bring only happiness and joy to you and your loved ones.

In the beginning of Nov, we are proud to deliver a complete frozen potato fries process machines of 1000kg/hr to our domestic customer. Machines include raw potato grader, peeler, and slicer, rinsing machine, blancher, continuous deep fat fryer and fluidized IQF freezer. Congratulation to our clients again.

For inquiries about our products or pricelist, please leave your email to us and we will be in touch within 24 hours.